This year’s winner of TechSoft’s UK Schools Under 19 SOLIDWORKS Competition made sure he would impress the judges with his ambitious entry. George Worledge of St. Paul’s School in Barnes, London produced an amazing model of the school’s Team Firefly race car which they then reproduced full size and entered in the prestigious Greenpower Trust competition (see www.greenpower.co.uk)

The school has been entering the Greenpower Trust competition since 2006. They were made aware of the TechSoft UK Schools SOLIDWORKS competition via the Twitter account (@TechSoft_UK), and George was keen to enter.

George began modelling the whole Firefly car using SOLIDWORKS by first creating 3D solid models of the parts of the car. Relevant parts were then stress-analysed and the body shape tested in the software flow simulator before the full assembly was built up. George says “Following the inevitably time-consuming process of iterative design, the results were very impressive – the drag force at 16m/s (60kph) was reduced down to only 6.5N with a drag coefficient of only 0.17. This produced a drag force reduction of 120% over my first car design.”

The end result was a complete CAD file of the car, detailing every washer and bolt. George says “I used SOLIDWORKS features such as flow simulation, FEA stress analysis, toolbox and rendering tools to enhance my design process.” He points out how the ‘Toolbox’ and ‘Hole Wizard’ features of SOLIDWORKS were invaluable for keeping track of the vast number of fasteners required. “By modelling the fasteners in the CAD model during the design phase, it became much easier to then manufacture parts with established hole positioning and fastener size.” 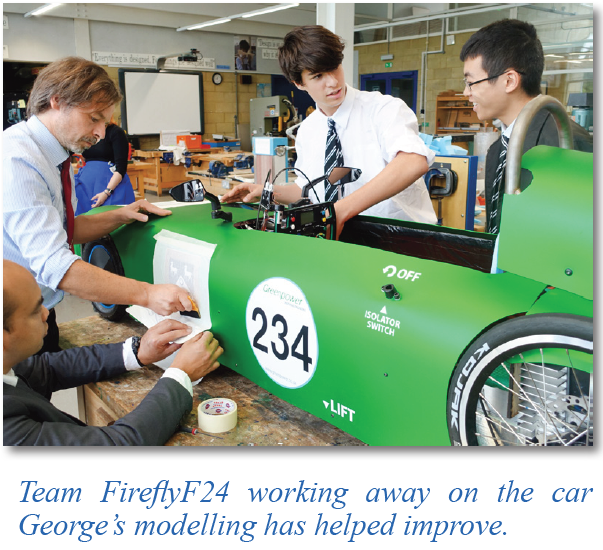 A 3D printed scale model of the body was created to aid in design visualisation and fully rendered images of the car were used in marketing material to raise money to fund the car’s manufacture. The FireFlyF24 team manufactured the full-size car in only three months, a testament to the preparedness of the design, and the labour-saving SOLIDWORKS features used in the manufacture.

George’s work displayed a clear grasp of the mechanical and graphical talents needed to succeed in any design and engineering related field. This, along with his drive and determination will stand him in good stead in achieving his ambition to be involved in the motorsports industry. 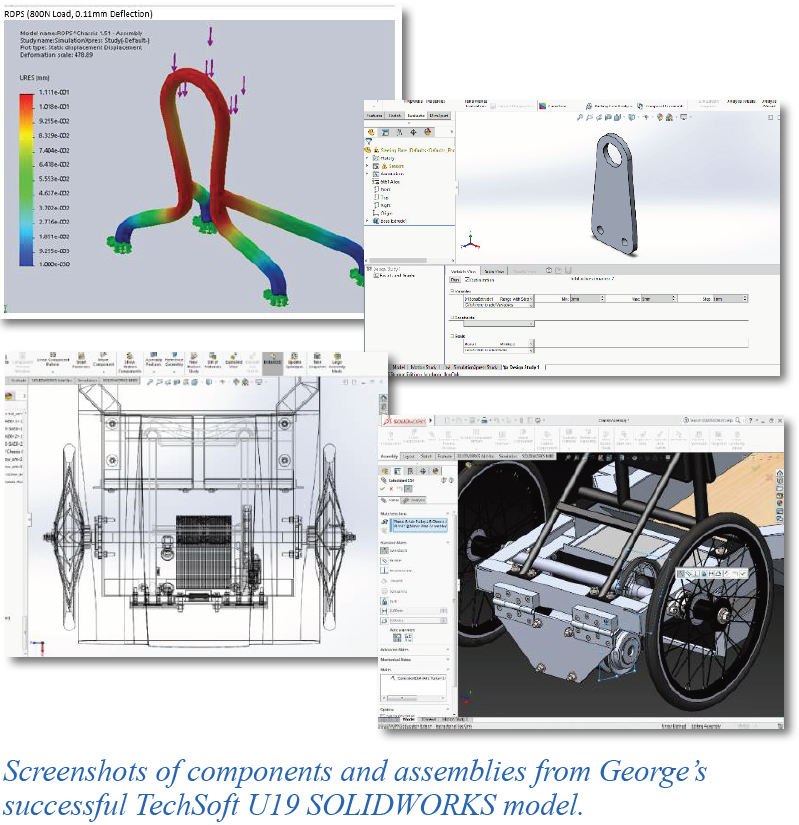 SOLIDWORKS has continued to be adopted across the educational spectrum, and this industry standard design package is now a mainstay in schools, colleges and universities. The iterative design process is encouraged by SOLIDWORKS, and it is great to see students taking advantage of this. If your students’ work deserves recognition, then look out for next year’s competitions at www.techsoft.co.uk/competitions

by Nick Davies of TechSoft, November 2018
All Articles